Here’s something very hard and extremely simple at the same time. A beautiful paradox. But it’s not an idea, that’s the hard part in a sense. Because we’re oriented to wanting some static knowledge that we can claim as ours. But knowledge is actually very difficult to process or really understand. To hold the idea that I’m selfish, for instance, isn’t the same thing as really facing my own selfishness. Real intelligence is honesty, not intellect.

Sometimes self-knowledge is a false cover, confirming our tired old convictions. But real self-knowledge is critical self-awareness.  No firm conviction can survive the irradiation of critical (or negative) awareness. After all, I’m only being honest when I recognize that I can’t actually know anything for sure. The world is infinite, and my brain only measures a few measly inches. So being certain is a way of lying to myself, saying “reality is here in my grasp.” What I grasp is already past-tense, static and artificial. END_OF_DOCUMENT_TOKEN_TO_BE_REPLACED 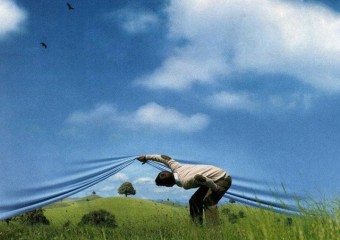 “All is a Question of Voices” (Samuel Beckett)

I don’t know what is real. I know only stories. Reality itself is obscured behind an interpretive film. But if there was a way to remove these perceptual “cataracts” I’d blind myself, because I can’t make sense of reality without a story. Story and reality are impossible to separate. But I need to find a way to distinguish them. Otherwise I’m delusional. And this delusion has real and deadly consequences.

Stories create every objective thing and Other I encounter. Nations and races, for example, are highly selective distinctions that settle over the world like transparencies over a drawing. And when these fictional separations are conflated with reality, real national and racial divisions erupt. These divisions are not facts of nature, but what physicist David Bohm called “artifacts” of the story, of my own imagination.

There’s something electrifying here. Against a fact of nature I’m helpless. But my own agency is revealed in artifacts of the imagination. It suggests that much of what passes for human nature, including aggression between groups, is not inevitable. END_OF_DOCUMENT_TOKEN_TO_BE_REPLACED

“The sense of danger must not disappear:
The way is certainly both short and steep,
However gradual it looks from here;
Look if you like, but you will have to leap.” – W.H. Auden (Leap Before You Look)

Narcissus is the “Dreamer”: In Honor of Ta-Nahisi Coates

I’m privileged to be a dreamer. I live in a cloud, which rises from the smoke of guns and bombs. My world is made possible by war. We are all here. Our collective voice is the Web and the media. The voice is growing harsher. It’s Narcissus reacting to his suddenly uglier image. He squirms in discomfort. What does he do when he comes face-to-face with his own vainglories of racism, war and hyper-rational control of nature? How will he peer through the dream, and turn away from his beloved? END_OF_DOCUMENT_TOKEN_TO_BE_REPLACED 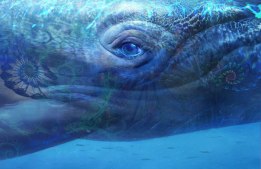 It’s been interesting to reflect on the change I’ve felt after posting that long introductory “manifesto.” I’m tremendously grateful to the people who read the thing closely. (Special thanks to Tony Dias, Jeppe Graugaard and Brian Shampnois). It feels like a great privilege to have found even one person, let alone a half-dozen, who rigorously engaged the piece. And I suspect that the ideal size of this pool of perceived readers corresponds to David Bohm’s ideal pool for dialogue – between 5 and 25. I can’t realistically picture more than that without the voice becoming vague and almost political in character (as if I were making a public speech).

I never used to think I needed anyone to read anything I wrote apart from the one person to whom I was writing. But that person’s attention has been wavering of late (it was my dog). And I know now that the quality of attention I’m able to put into this thing is dependent on the quality of attention of the reader. And this is a strange thing to realize: I can’t say certain things unless I know there’s someone there who understands what I mean. END_OF_DOCUMENT_TOKEN_TO_BE_REPLACED